My first day in Portland was supposed to be the classic Portland day….cold and rainy.  But the PDX gods must have been smiling on me, because we had beautiful sunshine and fair weather the entire day.  Breakfast day 1 had us traveling across the river to the west side….downtown Portland to be specific.  Walking into Tasty n Alder, I knew I was on the right track to start my food adventures in Portland.  We started off with “Tasty” bloody marys that were garnished with spicy pickled vegetables that are made in house.

We ordered a Chocolate Potato Doughnut to kick things off….perfectly sized to give us each 2 bites and not ruin our appetites.  The donut was made to order….moist and lightly chocolate flavored which allowed the accompanying creme anglaise to really stand out. 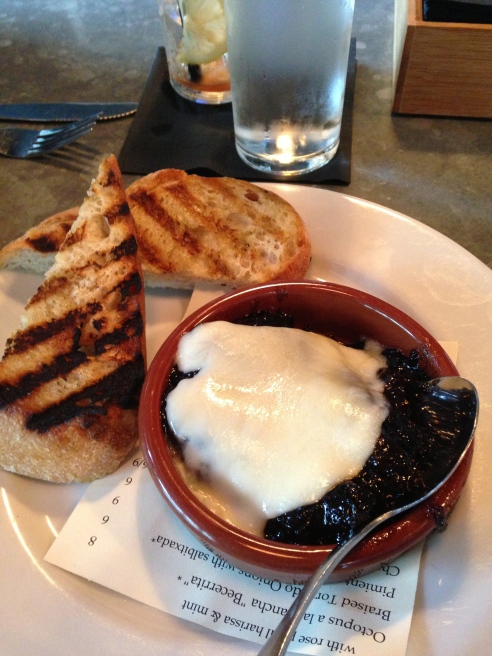 Next up, Baked Prunes with Taleggio….I was a bit skeptical at first, thinking this was a dish for the geriatric set.  But I was wrong.  Grilled bread just waiting to be slathered with rich, sweet prunes that had been baked with salty, creamy taleggio.  I need to make this at home.

I’m not usually a fan of radicchio…usually too bitter for me.  But Warm Radicchio with Bacon Lardons, Manchego and a 6 minute egg?  Sold. 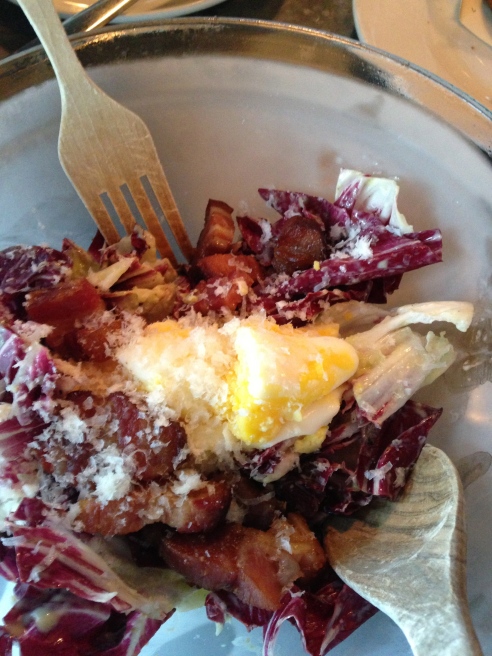 And the show stopper breakfast entree?  Bim Bop with Bacon and Eggs AND house made kimchee.  I wanted to chain myself to the chair and never leave this place.

So, in the end, I didn’t chain myself to the chair, and left the restaurant in a respectable fashion.  But I can tell you, I am still dreaming of the Bim Bop.

We headed back to the east side, and walked around a bit before settling on lunch.  There is a great bookshop in the southeast, Powells.  Powells is like the west coast version of Strand.  I bought an Italian phrase book hoping to improve my Italian before the end of the month.  Sandwiched between two sides of the bookstore was a specialty food store that specializes in Italian pastas and local wines, Pastaworks.

Finally ready to eat again, we stumbled upon a restaurant that I had heard about…Por Que No, a small Mexican restaurant that uses locally sourced ingredients.  After ordering peach-blood orange margaritas, we waited for the tacos and tamale to arrive.

Now, I have to admit, I am usually skeptical of tacos outside of Mexico.  I have been fortunate enough to travel to Mexico City enough times that tacos in the U.S. never seem to satisfy me.  Don’t get me wrong, these tacos are definitely worth it, but they aren’t D.F. either.

We started off with seasonal tacos filled with delicata squash and peppers. These were my favorite.

We also had the tacos Al Pastor and Pollo Verde.  Both good, but a little too wet, as they don’t double up the tortillas like many taquerias in Mexico (hint, hint).

I’m a sucker for a good tamal, and the Tamal with Fresh Corn and Autumn Vegetables did not disappoint.  The masa was nice and light, and the salsa verde on top was a nice contrast with the corn and squash inside.

After a long nap (I’m still on NY time), we walked to dinner in Chelsea’s neighborhood….”only about 12 blocks” turned out to be about a mile and a half.  Not a big deal for me WHEN I’M WEARING COMFORTABLE SHOES, but I just happened to be wearing cute boots, and still cannot feel my feet. Did I mention we also walked home?

But enough about me, because I would do it all over again just to have dinner at Ave Gene’s.  Although we had a reservation for a table, we were lucky enough to snag two seats at the bar.  Cocchi Vermouth di Torino on the rocks was the perfect aperitif to wet our appetites.  Starting with the oh so light and oh so crisp rice balls otherwise known as Porcini Arancini with Taleggio.  I think they really like taleggio cheese here in Portland.  So do I. 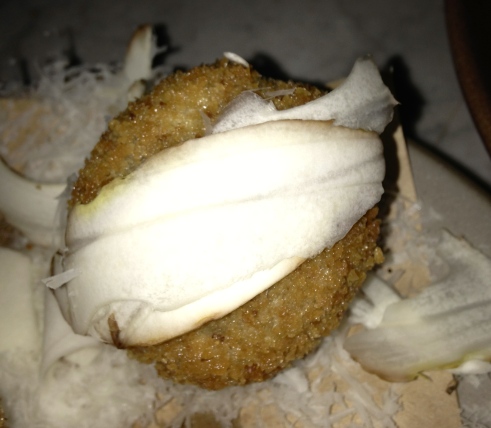 We ordered a bottle of 2009 Tabarrini Montefalco….I know, you’re thinking “why not an Oregon Pinot”.  Because we were eating Italian food and I LOVE Montefalco.

Now on to what originally brought me to this restaurant.  I had read an article in Bon Appetit (apparently so had all of the other foodies and tourists in Portland) about Ava Gene’s being the #5 Best New Restaurant in America 2013.  The article raved about the salads at Ava Gene’s, and if you read my blog, you know that I’m a sucker for salads.

Celery, Sunchokes, Dates, Walnuts, Parmesan, Lemon.  A cool crisp contrast to Beets, Carrots, Celeriac, Pistachios, Raisins.  Both salads were outstanding and could have been a meal, as the Beets/Carrots were quite hearty.  Look for my adaptation of these salads in the future. 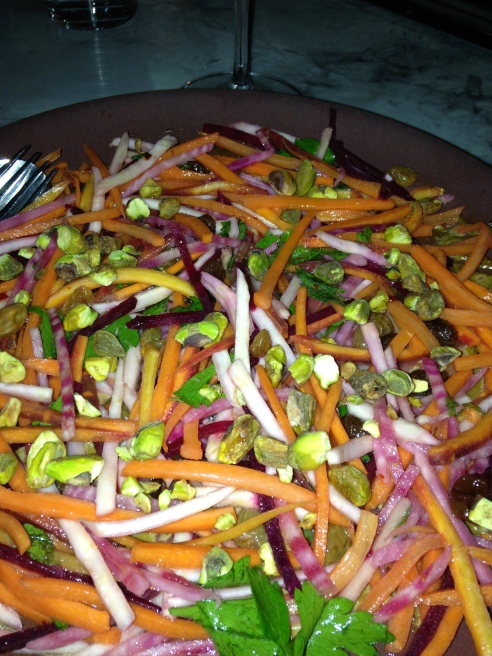 And if I weren’t on vacation, I would have stopped there.  But I am a tourist tonight, so on to the pasta.

Fusilloni with Lamb Ragu in Bianco and Escarole.  I’d never had a “white” lamb ragu, and don’t know why, because leaving out the tomato really allowed the delicate flavors of the lamb and escarole to shine through.  The next pasta up was the Extralunghi Caserecci with Sunday Sausage Sugo and Whipped Ricotta.  This dish is how all Sunday sauces should be: light but meaty and spot on with the addition of whipped ricotta.  But my picture was blurry (surprise, surprise after this much wine), so you’ll have to imagine how awesome it was.

We ended the night with one of the best Affogatos I’ve had.  A scoop of creamy vanilla ice cream topped with a shot of hot Stumptown espresso.  Sometimes the simplest things are really the best.  Might be worth it to mention that the uber rich owner of Stumptown also owns Ava Gene’s.  Brilliant.

Until tomorrow Portland  I’ve got a mile and a half to walk back to Chelsea’s.  Goodnight.