Having enjoyed Mexican wines in the past, I was looking forward to our first full day in Valle de Guadalupe.  Now, I know most of you are thinking “why isn’t she drinking tequila in Mexico”?  Believe it or not, Mexico has been making wine since the 16th century when Spanish brought vines from Europe.

But before the wine tasting can begin, I needed to refuel myself.  Breakfast at La Villa del Valle starts with a small buffet of fresh fruits and granola, yogurt and scones all made in-house. 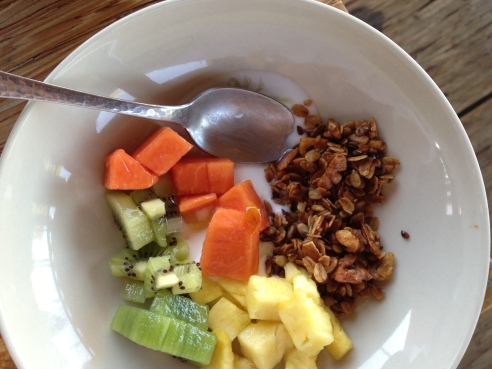 Now, this would be a perfect breakfast to most people.  But this is Mexico, and you can’t have a proper Mexican breakfast without an aguas frescas….today’s being fresh green apple.  In the foreground is the whole grain toast with butter and a spiced peach jam. 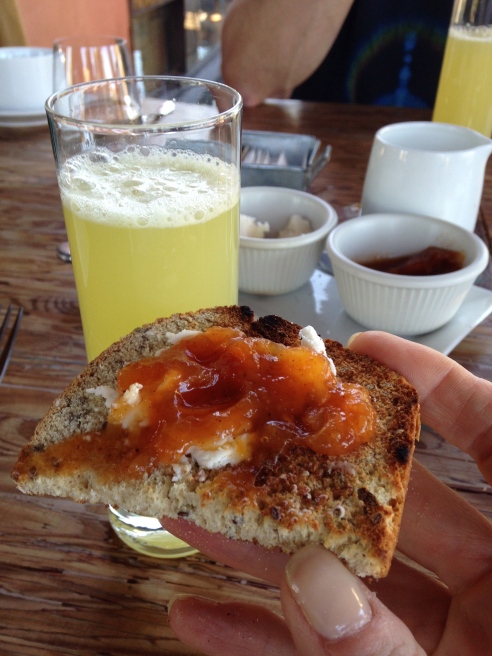 But wait!  There are fresh eggs to be had, as there are chickens on the property (and a rooster that wakes you each morning). 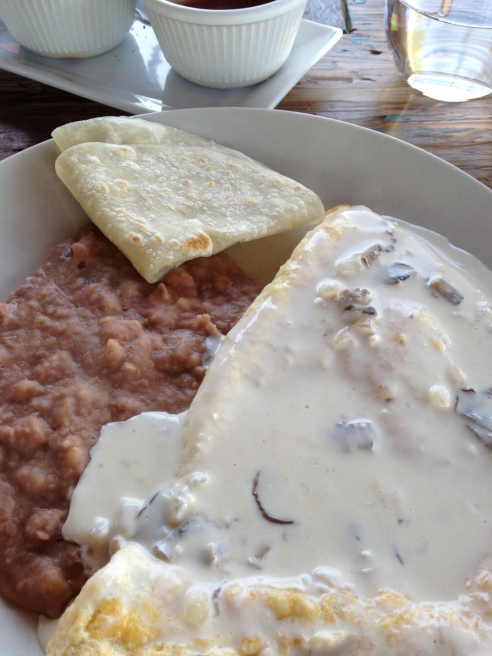 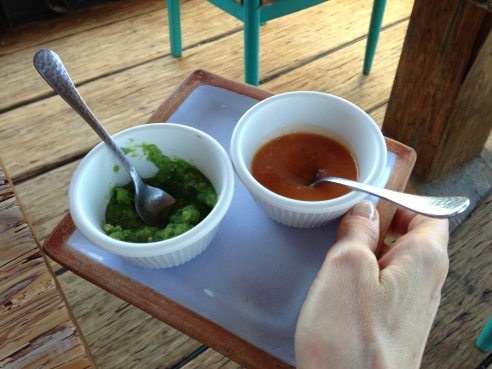 Can you see why I’m so smitten with Mexico?  Such a busy morning and I haven’t even finished breakfast yet. 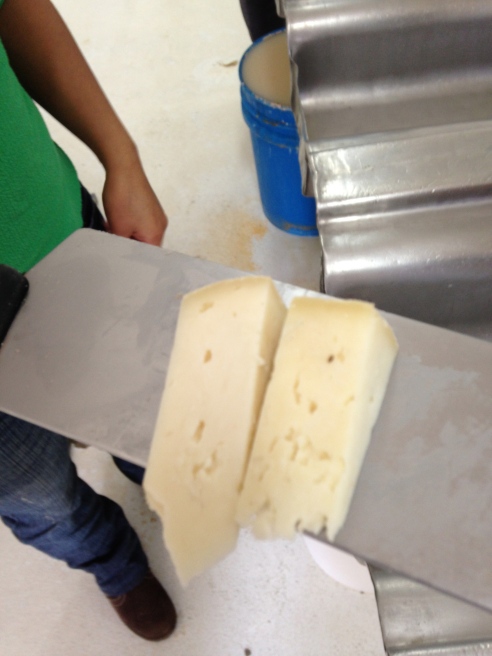 First stop of the day was Rancho Cortes, a local artisanal cheesemaker that made the lovely cheese that topped my oyster last night and filled my omelet this morning.  Happy to share a taste of their creamy-salty queso fresco with us, they were unfortunately out of the queso anejo, gouda, and manchego.  Not that I needed anything more to eat this morning! 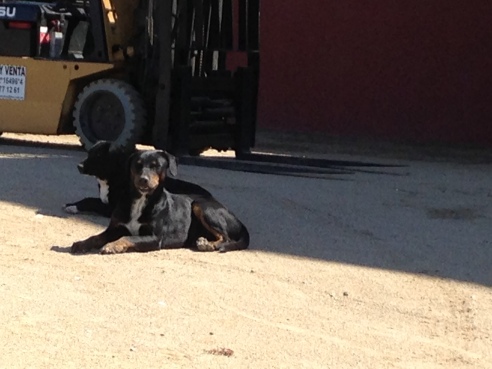 On to our first winery, Hacienda La Lomita.  We were greeted by the adorable dogs above….and quickly discovered most homes and farms had a family of friendly dogs to guard the property. 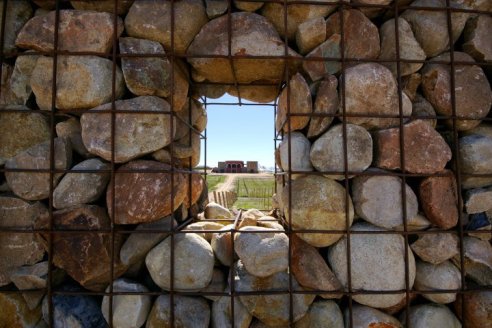 Hacienda La Lomita is a gorgeous property with lots of stone and iron.  We were the only ones in the tasting room during our visit and got to enjoy big (full glass) tastes of four delicious wines, including a cold, crisp sauvignon blanc. 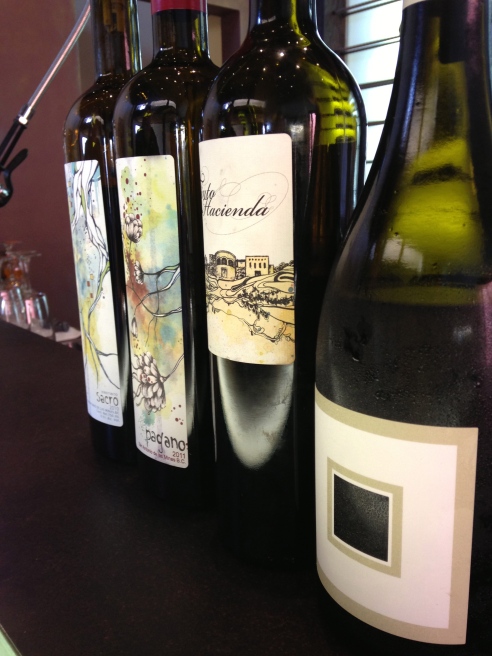 Regretting such large pours, I was off to the next winery, Villa Montefiori.  Not as grand and pretty as La Lomita, but oh, did these wines impress.  Villa Montefiori was found by Paolo Paoloni who came to Mexico from Le Marche, Italy in 1985.  Paoloni worked for the large, commercial LA Cetto, then founded Villa Montefiori a decade later.   In 1998 they planted Italian and French varietals with the first released vintage being 2005.  I love Italian wines, and the Italian grapes grown in Mexican soil produce fruity, elegant wines. 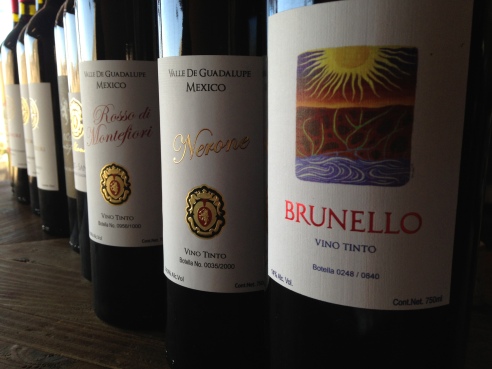 Finally ready for lunch, we were off to the newly opened El Cielo Winery to try their restaurant and wines.  Turning onto the property, I was hopeful, as the grounds were impeccably landscaped.  Walking in the front door, I knew I should probably turn around, but was still feeling hopeful.  But there was staff in matching shirts and earpieces to communicate and you had to buy a ticket before going to the cellar to taste the wines.  A dark cellar that would make a sexy nightclub, but not such a great tasting room.  Wines were so-so, but I did find one that would be acceptable for eating with lunch.  Sometimes you need to heed the signs….but then I saw the kitchen. 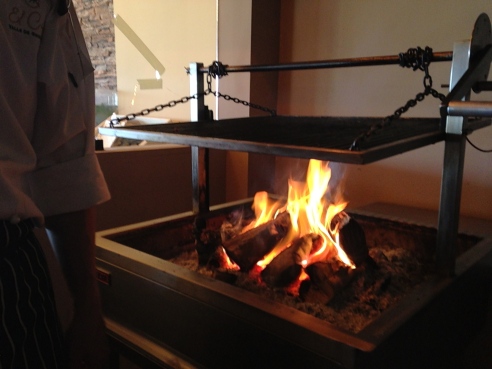 Wood burning grill to cook the steaks?  Check.  Beautiful, window-walled room to watch the vineyard as I dined?  Check.  Friendly, attentive staff?  Check.  Delicious food?  No.  But it looked pretty. 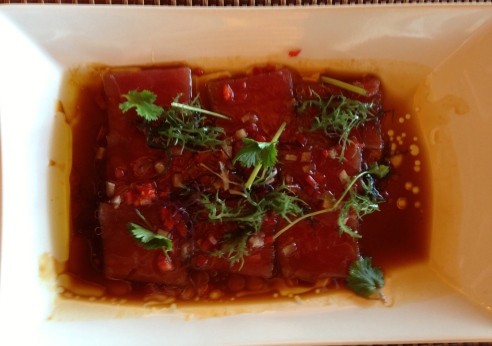 But why douse the ceviche with soy sauce and oil when the fish is as fresh as this? 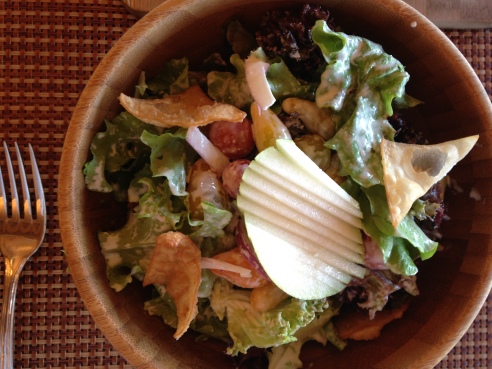 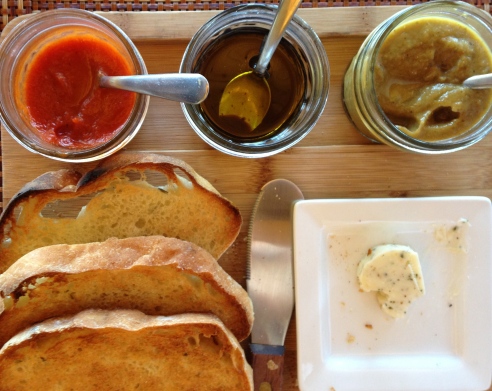 Okay, so the toasted bread with herb butter and three dipping sauces was good. 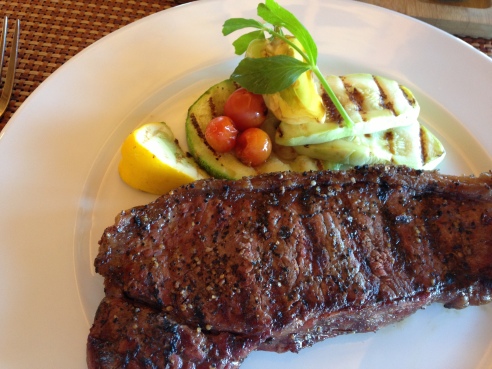 But not good enough to erase the memory of a tough, tasteless NY strip.  Ordered medium rare and served medium well.

Now, to their credit, this was El Cielo’s first week.  And the owner was on site and very friendly.  But with some much outstanding food and wine in the Valle de Guadalupe, there doesn’t seem to be a reason to waste your time with mediocre food and wine.

Back to the Inn for a nap and puppy kisses before dinner. 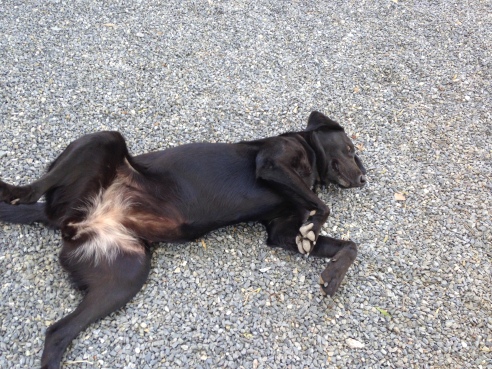 Dinner was at Laja, Valle de Guadalupe’s pioneer in farm to table cooking, often called “The Mexican version of the French Laundry”.  And when I say farm, I mean their farm, right outside the back door.  Set in a large, open farmhouse room, we had them open a bottle purchased earlier in the day, a Villa Montefiori Neroni.  Now, Laja has an impressive wine list featuring many of the area’s top wines, but I really wanted to try this special bottle. 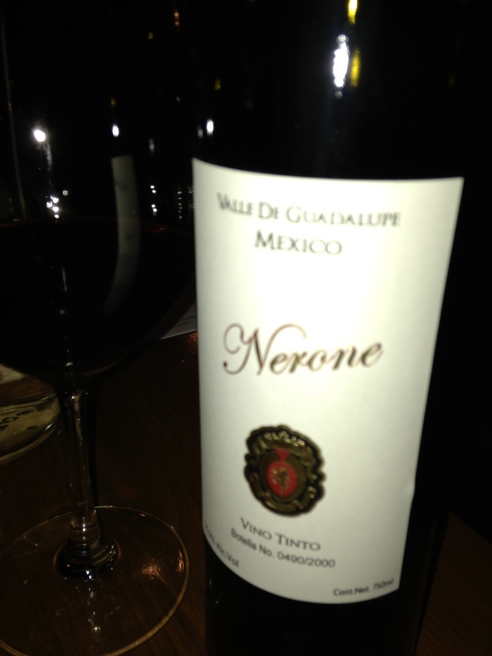 I was not disappointed.  However, I did order a glass of white wine to go with the first of four courses, Turnip Veloute with Serrano Ham. 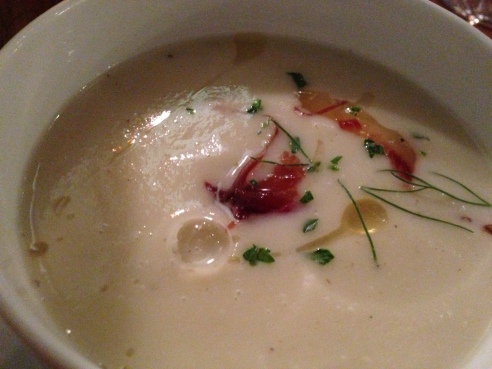 We got two of each of the next three courses so that we could taste everything.  Except, I have to be honest, I didn’t taste the rabbit.  And I’m okay with that. 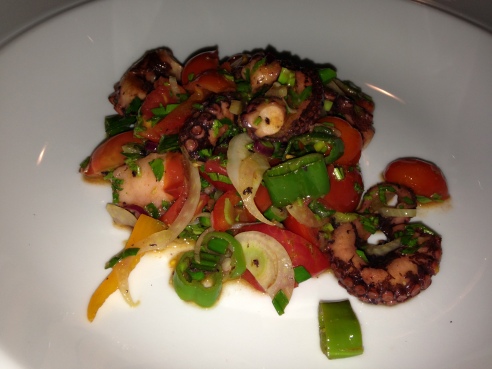 Sauteed Octopus with Piquillo Peppers and Tomatoes.  I don’t think I’ve ever had fresher octopus (or peppers or tomatoes for that matter).  The other second-course offering was an Eggplant Ravioli with Beef Broth and Cheese. 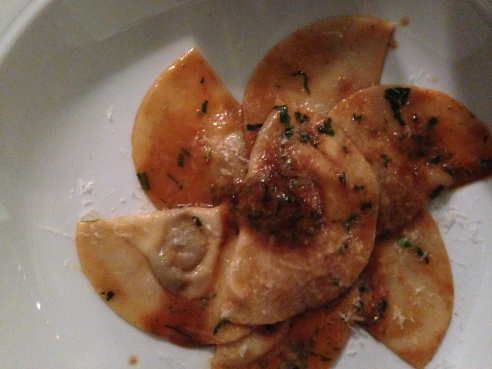 Drinking the Nerone and eating a perfect plate of pasta, I could have been in Italy. 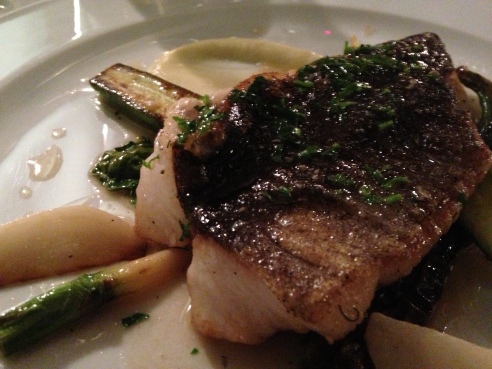 On to the third course which featured a large, moist piece of Pan Roasted Black Cod with Fennel Puree, Carrots, Zucchini and Kale.  The photo does not do this tasty course justice. 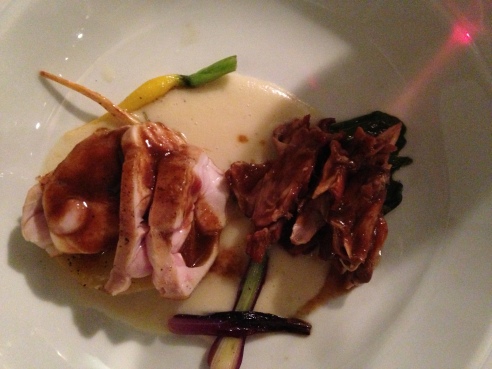 Now, I did taste a tiny piece of very delicious potato from the third course offering of Local Rabbit with Confit Potato, Onion, and Swiss Chard.  And I hear that the rest of the dish was “off the hook”.  By the look of the photo, I would agree. 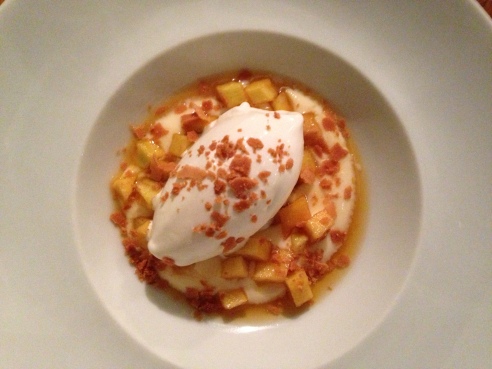 Luckily, we tried both desserts, a Lemon Verbena Ice Cream with Caramelized Apple and 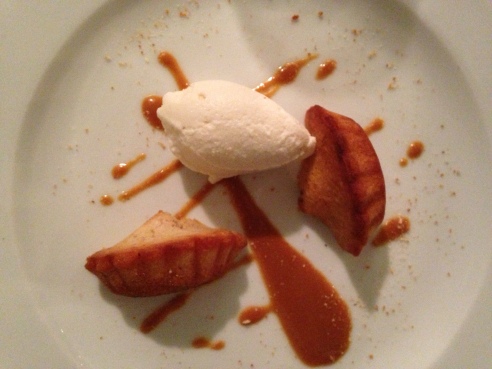 an Almond Financier (cake) with Pine Nut Ice Cream.  Both very good, but not on the same level as the first three courses.

I would like to note that service everywhere in this area (and Mexico in general) is very friendly, however, the staff at Laja went above and beyond without being obtrusive.  From the moment you walk in, they make you feel like a regular.  Thank you, Laja.  Simply amazing.